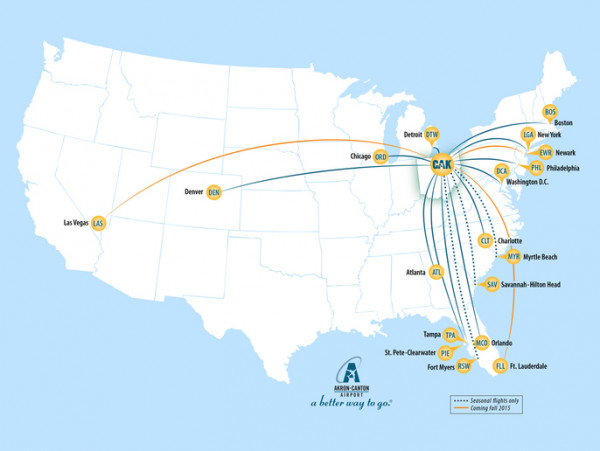 Earlier this spring, Southwest Airlines announced some significant cuts in flying from CAK. This kind of news is never pleasant but as those of us who have worked in the aviation biz for a while know all too well, cuts happen. Sometimes, even successful flights and popular routes are cut too. I’ll admit that those cuts hurt the most. I remember when Fred Krum, long-time CAK director, told me that our airport can get caught up in big sea changes and often those changes are harder for us little guys.

Airline consolidation is the big sea change that continues to affect CAK and many other airports around the U.S. Most of the airline consolidation is complete. Today, there are four dominating domestic carriers- Southwest, American, United and Delta (all serve CAK, by the way, thank heavens!). And, there are a handful of scrappy smaller airlines like Allegiant, JetBlue, Spirit and Frontier. That compares to nine larger domestic carriers just a decade ago.

Largely, I think that consolidation has benefited the US airline industry. The airline sector is profitable, which is a good thing, and they are investing in their fleets and customer experience. It’s pretty nice to fly these days.

So, when Southwest announced their cuts to primo markets like New York, Denver, Boston and Washington D.C. (they are adding Vegas and keeping Atlanta, and three Florida markets…which is very encouraging), we felt nervous; very nervous.

We didn’t wait until the axe fell however, to start building relationships with other airlines. The long and successful track record of support and partnership, built by our exceptional CAK team, has come in real handy. We are thrilled that United Airlines is tripling their capacity (number of seats) at CAK by adding new service to Newark and adding daily trips to Chicago O’ Hare. American Airlines is adding daily service to LaGuardia. Delta is adding a fourth daily trip to Detroit. And last but certainly not least, Allegiant Air has landed at CAK! They have added four nonstop vacation destinations (two are seasonal) and have been amazing to work with!

So, as we look at overall airport capacity compared to pre-Southwest cuts, CAK is about even. Our partners have filled the gap. Our community gets the service it deserves and we are thankful. And, our route map actually has more destinations than at any other time in our history. Please, consider these new routes when you plan your next trip. If you do, more great options will keep coming our way.